"There are very few bands in which the drummer has such a distinctive style that becomes irreplaceable. Adrienne is one of those drummers, a unique musician, a leader and the spine of one of the most unique bands ever…

Earth – Full Upon Her Burning Lips

Earth’s latest is a record that feels curiously intimate and subtly powerful, with as many plainly beautiful parts as hazy, evil-sounding ones. Though…

The minimalist drone-riff masters pare away excess and focus on the seismic repetition that made their best work so resonant, creating a new peak in their long discography.

“I would hear riffs from bands that I liked, and I’d want them to keep playing that riff,” Dylan Carlson recalled recently. “I was always wondering what would happen if you just stuck on that one riff.” That such a simple idea could spawn a varied, lasting musical career seems impossible. Yet over three decades, Carlson’s band Earth have crafted a rich discography by doing just that. Early on, they stretched single chords into minimalist epics—inspired equally by La Monte Young and Black Sabbath—to coin a drone-metal style later perfected by descendents Sunn0))). But even as Earth’s sound has grown since returning from a late ’90s hiatus, Carlson remains infatuated with the power of repetitive riffs.

Earth's newest album, "Full Upon Her Burning Lips", is OUT NOW. Stream the album in full or purchase here: http://smarturl.it/Earth_FUHBL

The Bandcamp Guide to Earth

For nearly 30 years, Dylan Carlson has occupied an unlikely dual role as a true vanguard of experimental music and an undisputed Lord of the Riff, garnering respect from outer-sound explorers and metal heshers in equal measure.

Here’s a guide to a few of the most essential releases in Earth’s vast discography.
Full here feature via Bandcamp

Earth’s trajectory is not so much of an orbit as it is a deviation. For the past three decades, the only constant for the band headed by Dylan Carlson has been change – which is ironic for a group whose music relies heavily upon repetition.

Earth started out with ground-shaking seismic drone metal on 1993’s Earth 2, then took a left turn in 2005 into the arid West with the Morricone-inspired Hex; Or Printing In The Infernal Method. Almost a decade later, they ventured into meditative rock with Primitive And Deadly.

Now, the band have purged themselves of any embellishments, stripping instrumentation down to Carlson on guitar and bass and Adrienne Davies on drums and percussion. The upcoming record, Full Upon Her Burning Lips, is a lesson in austerity, and spotlights the duo’s sonic symbiosis.

Ahead of the release, we speak with Carlson about the record, his fascination with Telecaster pickups and his favourite collaborations thus far. 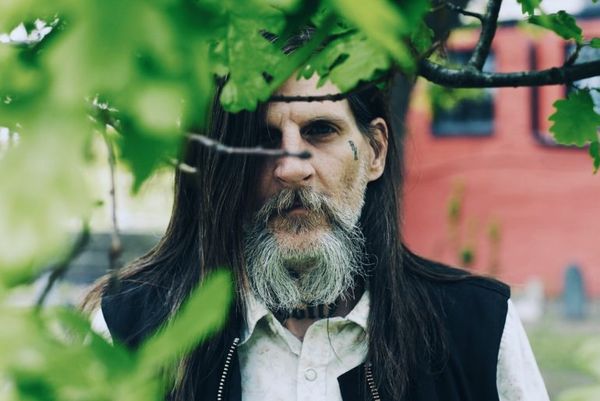 Guitarist and bassist Dylan Carlson and drummer and percussionist Adrienne Davies of Olympia, Washington’s Earth return as a duo on Full Upon Her Burning Lips, out via Sargent House on May 24. “I’ve been really fortunate in playing with some great people who I love,” Carlson says. “I just really wanted this album to be the core, and I felt it was the first album where the drums really get to shine.”

“Live, they’re a big part of the show, but on record, especially when you have a lot of extra instrumentation, the drums are sort of in a background role,” he admits. “With this one, I wanted everything—the guitar, the drums, and the bass—all to be very upfront. Previous records that we’ve done have been quite lush-sounding: a lot of reverb and studio glossiness. I wanted this one to be quite dry and everything upfront and raw.” 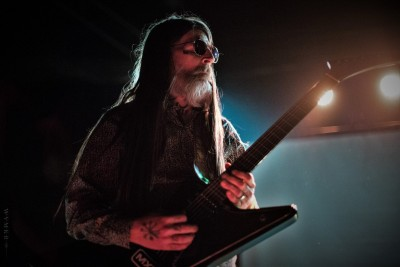 From soundwaves to landscapes, the sonic experience conjured up by Earth is both a meditative and an immersive one. From having laid the root foundations of rock’s infamous exercise in extreme minimalism with the classic Earth 2: Special Low-Frequency Version, the Seattle-born earth-shakers have braced through the decades carrying a legacy of slow, heavy riffs and long, introspective song-structures with a strong emphasis on repetition. The band has kept their pace slow and steady whilst branching out into a multitude of directions, ranging from stoner rock on Pentastar: In the Style of Demons to the esoteric desert-rock musings on Primitive and Deadly. For the band’s first record in over five years, leading member Dylan Carlson has decided to strip things down for a back-to-basics, raw approach, working as a duo alongside drummer Adrienne Davies to harken back to Earth’s core sound. We caught up with Dylan ahead of his solo performance at Paris’ Sonic Protest Festival to ask about his upcoming record, as well as learn more about his approach to sound and music playing.

Olympia, Washington’s Dylan Carlson has kept his legendary, long-running drone-metal project Earth going since 1989. In those years, he’s collaborated with Kurt Cobain, branched out into different musical ideas, and pioneered the whole idea of instrumental metal as full-immersion ambient music. Carlson has been busy lately, but it’s been five years since Primitive And Deadly, the last proper Earth album. Next month, they’ll be back at full force with a new studio LP called Full Upon Her Burning Lips. We’ve already heard the early track “Cats On The Briar,” and now they’ve shared another one called “The Colour Of Poison.”

“The Colour Of Poison” is exactly the type of track you think of when you think of Earth — a vast, heavy, elementally satisfying slow-trudge riff-monster. Part of the appeal with Earth is that you never know when they’re going to launch into free-jazz freakouts or Ennio Morricone soundscapes. But there’s still something satisfying about them doing basic stick-to-your-ribs doom metal with this kind of majestic mastery.

The Red Bull Music Festival is in full swing here in Los Angeles, with exciting upcoming shows from Robyn and the music from Red Dead Redemption on the way. Earlier this week, one of the highlights of the music festival came as a part of its concurrent film celebration Center Channel, hosted at East Hollywood’s Ukranian Culture Center, which is known for hosting a Pyanska Festival to punk rock shows. This performance was particularly special, as it saw drone metal legends Earth provide their take on a live score for the 1920s-era Danish silent film Häxan.

Legendary drone pioneers, Earth, will be touring the US in support of their upcoming album Full Upon Her Burning Lips, with special guest Helms Alee. PREORDER your tickets now at thronesandominions.com
(password: burninglips)

Feature via Consequence of Sound

Thirty years after launching their career, drone metal veterans Earth are back with a new song “Cats on the Briar”, premiering right here at Heavy Consequence. Moreover, the band has announced details of its new album along with dates for a US tour.

Featuring the core duo of guitarist-bassist Dylan Carlson and drummer Adrienne Davies, Earth will release the album, Full Upon Her Burning Lips, on May 24th. It marks the band’s first full-length release since 2014’s Primitive and Deadly.

As with the majority of the Olympia, Washington band’s music, “Cats on the Briar” is an instrumental tune, serving as the third track on the upcoming LP.

“‘Cats on the Briar’ is simultaneously uplifting and ominous, with a sense of perilous beauty,” Carlson tells us of the song. “It contains some of my favorite melodic embellishments, and I’m proud of the succinct solo at the end (all of which were developed during the recording, ‘off the cuff,’ so to speak).”

He adds, “It was the first song written for the new album. Inspired by a vision of my wife, Holly, dancing through a desert landscape, filled with dangerous flora and fauna. It was first performed in 2016 at Hellfest, in France. I feel this album is the strongest statement of what Earth is and does since I re-started the band in 2002, and this song is a great representation of that fact.”

Earth will support Full Upon Her Burning Lips with a US tour that kicks off in Seattle on May 24th, the same day the album is released. The trek, featuring opening act Helms Alee, runs through June 29th in Boise, Idaho. See the full list of dates below, and pre-order the new album at this location.